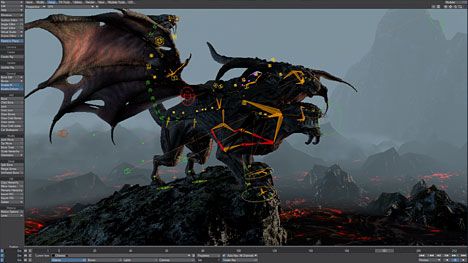 Genoma is a new modular instant-rigging system that can be used to quickly rig a simple biped or quadruped for animation in Modeler without the need for specialized rigging tools. It offers modular rig presets that consist of skeletal parts such as spines, wings, arms, legs, hands and feet. Complete rigs for biped and quadrupeds can easily be customized using Genoma.

A specialized particle system that allows items to move in very organic ways, Flocking offers new prey and predator behaviors that allow flocks to chase other flocks or have flocking agents seek out and chase the closest prey. Neutral flocks do not chase but still affect other agents for collision avoidance. Other new features include Plane, Pursuit and Arrive directors and the addition of node controls.