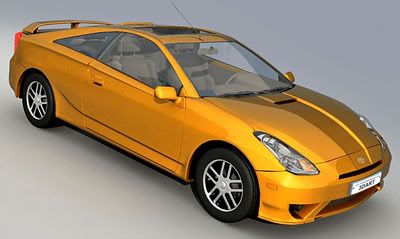 Toyota Celica was first introduced in 1970 by Toyota, Japan. In Latin Celica means heavenly. This is the latest model (seventh generation) of Toyota Celica. Toyota Celica had lot of performance and handling enhancements over the years, which made the young car racers to turn to Celica as it is also affordable compared to other cars of same class.

This is a high resolution model of Celica, textured with standard materials and bitmaps.

When I open the .3ds version of the model in Lightwave, I get an error that there are no vertices for parts of the model.
Only the wheels are there. Could you look into fixing that, please?