Volume select modifier in 3dsmax named as (Vol. Select) in the modifier stack is a versatile modifier which can be used to achieve some simple animation effects. For example , we would have enjoyed Tom and Jerry cartoon animation and most of the times we would have seen Jerry (mouse) running under a carpet. In this tutorial we are going to do that, but we are not going to use 3d model of mouse or cat here, just the effect as illustrated below.

Create a plane and adjust the settings as below. 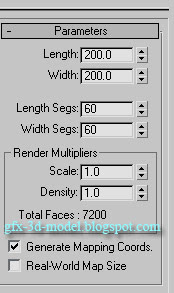 In the Command Panel, from the Modifier tab select Vol. Select modifier. 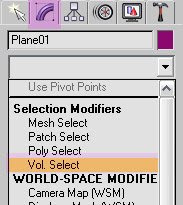 Volume Select modifier
Step 3:
Now create a cylinder over the plane and move the cylinder in such a way it intersects the plane as shown below. 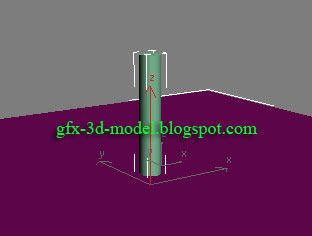 Now adjust the settings of Vol. select modifier as shown below. Only change the highlighted settings.

After selecting Mesh Object radio button, Click on the button labelled 'None' and select the Cylinder. The trick here is we have selected 'Crossing' as Selection type and Cylinder for the Mesh object. So the vertices of the Plane that intersects with the Cylinder is selected.

After this scroll down and select Soft selection as shown below, leave the default values as it is. 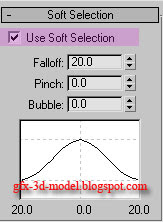 Now Select Push Modifier from the modifier tab and set the Push value to 8. Push modifier will be placed over the top, as shown below. 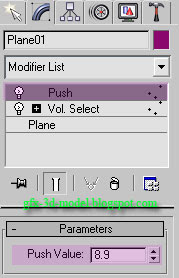 HI
THANKS FOR EVERY THING